Replacing the “Steuerpimpel” of a Dual 626 record player 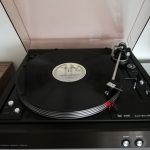 My very first (music) record was played on my father’s Dual 626 record player some 35 years ago. This record player is part of my HiFi equipment since a couple of years now. Though I tend to listen to music via streaming services or my own collection of flac files stored on my Synology NAS I still like to play records. And if I do, I really just listen to the music, it will not just run in the background while I’m doing something else. I like the sound and I’m kind of emotionally attached to most of my records. The Dual 626 to my knowledge was built between 1979 and 1981 so my device probably is around 40 years old. It was and still is a very good record player. Some two years ago I got a new needle and everything worked until last year the tonearm would not automatically move to the start position anymore when trying to play a record - and it would not move back once the record ended. Some googling and the issue was found: the “Steuerpimpel” is likely to have vanished after 40 years…

Using a Yubikey to unlock LUKS encrypted disks (with Debian) 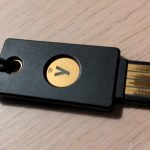 In probably most cases encrypting the local filesystem might not really be required. However once you tend to take your notebook with you to all kinds of places - i.e. on vacations - it might be good idea to do that. You’ll gain quite some security. But as always you will trade in some convenience - especially if you take it seriously and use a really long password (which you should!). To avoid typing that really long password (and remembering it) at each boot you can simply add 2FA by using a Yubikey.

Adding a Yubikey as second factor is not really complicated but every time I’ve set this up I had to search for suitable instructions again. So I will just sum up how it works - at least for Debian 10 and 11 - here. I will also link to the original instructions I found.

Once you’ve installed CalyxOS on your (Pixel) phone you’re ready to play with settings and preinstalled apps. If you’d like to give it a clean start you can simply reset to factory settings as you would with stock ROM (Settings -> System -> Advanced -> Reset Options -> Delete all data). Make sure not to delete your eSIM if you’re using one. After the phone restarts you need to go through the initial setup again (language, time zone, WiFi, etc…)

For a couple of years already I like to get rid of Google on my Android powered smartphone. Though I think that technically Google’s services cannot be outmatched: they just work, are easy to use and from what I understand pretty secure, they’re not really coming for “free”: you will “pay” with your data. Unfortunately there is no real good alternative when it comes to smartphones. You could go with Apple if you don’t mind being locked into Apple’s ecosystem (besides I’m not sure if you’re better off with Apple in terms of privacy). So far I never called a smartphone my own which was actually well supported by alternative Android ROMs like LineageOS for example. The phones which are best supported by custom ROMs are part of Google’s own Pixel lineup. It’s kind of funny when you think of it: if you want to remove Google from your phone, get a phone by Google… Anyway, I really wanted to check this out now so I got myself a second hand Google Pixel 3a for testing purposes.

Back when I was a teenager I spent a lot of time listening to music. I mean really listening to it - not just keeping it running in the background while doing other stuff. First I had a radio alarm clock with (cassette-)tape recorder. So I mostly listened to tapes which where recorded from radio. Of course the quality of those recordings and of the tape player itself would not stand any quality standards ;-) A little later I got my hands on my father’s stereo equipment (SABA receiver and tape deck with a DUAL turntable and some nice Canton speakers). This caused my standards to rise. I began buying records and copied them to tape. If I really liked the record it went on a “metal” tape, but usually I spent my money on “CrO2” tapes. But why buy a record and then copy it to tape? Why not buy the tape in the first place?